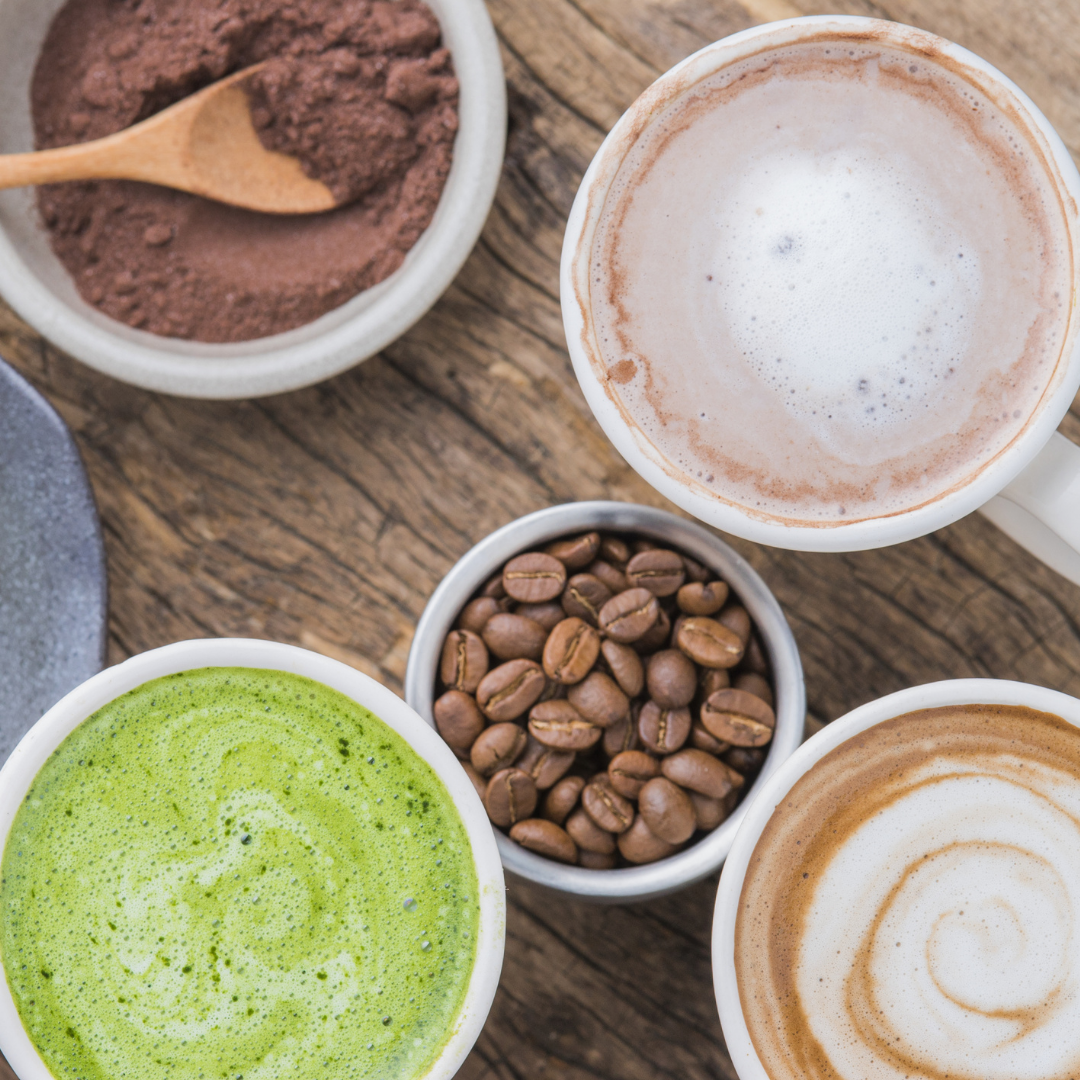 Here in America, we LOVE our coffee and caffeine. And hey - we’re not here to talk you out of that love affair. According to scientists at the Food and Drug Administration (FDA), caffeine can be part of a healthy diet for most people. The key, however, is knowing how much caffeine is too much, and identifying healthy decaf or caffeine-free alternatives.

In this blog, we’ll take a look at everything you need to know about caffeine, and help you understand how to stay healthy by avoiding too much caffeine.

When you think of caffeine, coffee probably jumps right to your mind. And for good reason - coffee is one of the most common and well-known sources of caffeine. A single cup of brewed coffee contains about 95 mg of caffeine. That’s not the only source out there, though. In fact, caffeine is also found in these common foods and drinks:

Caffeine is all around us - in many of the foods and drinks we consume daily. The more aware you are of these common sources of caffeine, the better able you are to control your daily caffeine intake.

While you probably won’t notice the effects of the trace amount of caffeine left behind (unless you’re very sensitive to caffeine itself), you may want to stick to herbal tea (which is completely caffeine-free) or a delicious coffee alternative that still offers a great coffee taste, such as Dandy Blend.

How Decaf Coffee is Made

Decaffeination takes place before coffee beans are roasted - while they’re still “green” - and, while it removes most of the caffeine from the bean, it does leave trace amounts behind.

If you rely on decaf coffee to keep your daily caffeine intake in check, we’ve got some bad news for you. There are a few different ways to decaffeinate coffee beans, but the most common- soaking them in solvents - isn’t that great for your health. During this process, coffee producers soak coffee beans in a solvent like methylene chloride (which can also be used as a paint stripper or a degreaser) to draw the caffeine out of the beans.

Fortunately, there are other methods, many of which use water. The Swiss Water method, for example, soaks the beans in water. After soaking, the water the beans rest in is full of caffeine and flavor. The beans and the water are then strained through a filter made of activated carbon, which traps the caffeine without compromising flavor.

If you’re a big decaf drinker, make sure you pay attention to how your beans are decaffeinated. Most coffee companies will outline their decaffeination process on their packaging. If you still have questions, visit the company’s website, or reach out to them directly.

How Much Caffeine is Too Much?

The answer is “it depends.” For healthy adults, the FDA recommends sticking to 400 milligrams or less of coffee each day. That breaks down to about 4-5 cups of coffee. That said, people are not all the same, and there are wide variations in how sensitive people are to caffeine.

Some health conditions and medications can make people more sensitive to the effects of caffeine. Additionally, for women who are pregnant or trying to become pregnant, experts recommend limiting caffeine intake to about 200 milligrams each day - or about 1 ½ 8-ounce cups of coffee. Breastfeeding women, meanwhile, should stick to no more than one or two cups of coffee each day.

While there is no set caffeine standard for children, the American Academy of Pediatrics discourages the consumption of caffeine by children and adolescents.

How do you know if you’ve consumed too much caffeine? You may experience the following symptoms:

We think it’s important to note that some folks struggle with the impacts of caffeine, or have dietary restrictions due to conditions like IBS or certain stomach conditions. What’s more, some people just don’t like to drink caffeine after a certain time of day since it makes it difficult for them to sleep at night.

You Don’t Have to Quit Caffeine to Stay Healthy

It’s a common misconception that you have to give up coffee if you want to be your healthiest self. By finding a few delicious decaf alternatives that you love, and knowing how to measure your daily caffeine intake, you can enjoy your daily pick-me-ups without feeling jittery.

Here at 5 Sparrows, we offer a variety of healthy coffee creamers- like our delicious dark chocolate mixture - that have zero caffeine. Stir them into your daily cup of joe to keep your caffeine intake in check while also enjoying some delicious sweetness. Check out our favorite recipes for a few delicious serving suggestions.